Public Media Company’s review of radio station sales data shows that COVID-19 has made a significant impact on transactions in the noncommercial radio market – both on the number of stations sold and the total value of those sales. 112 noncommercial stations changed hands in 2019 but that number dropped to 90 in 2020 and to just 68 in 2021.

A deeper look into the noncommercial radio sales indicates that a majority of the transactions in 2021 occurred between non-public parties (primarily religious broadcasters), representing 65% of all sales. In addition, 10% of the stations were acquired by a non-public entity (primarily a religious broadcaster) from a public broadcaster. In total, non-public entities acquired 75% of the stations sold in 2021. The chart below includes the breakdown of sales by buyer/seller type in 2021.

Composition of All Noncommercial Radio Transactions 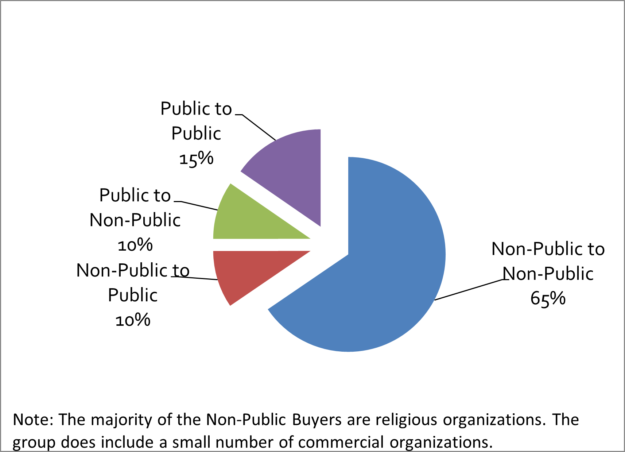 The Outlook for 2022 and Beyond

Sales data from the first half of 2022 indicates some early signs of recovery for noncommercial radio prices because of a stronger economy, low-interest rates, and excess liquidity in the markets during 2021. However, economic conditions have now changed as a result of persistently high inflation and the Federal Reserve’s tighter monetary policy. These changes will likely result in fewer buyers, sales, and lower station prices in the immediate future.

The noncommercial radio market is a subset of the overall U.S. radio broadcast industry and consists of approximately 4,500 full-power stations as of December 31, 2021. These stations broadcast on both the FM and the AM band of the radio dial. A significant majority of the noncommercial FM stations operate on the noncommercial, reserved band of the FM dial (88.1MHz-91.9MHz), but there are also some that operate on the commercial, non-reserved band (92.1MHz-107.9MHz). Of the 4,500 stations, approximately 2,200 (49% of all) are owned by nonprofits that focus on programming with a religious message. The remaining portion of 2,300 stations (51%) air non-religious programming. Of those with non-religious programming, over 1,000 are NPR affiliates. Some of these NPR stations focus on news and information while others follow a music format – with programming ranging from classical, to jazz, to AAA or world music. 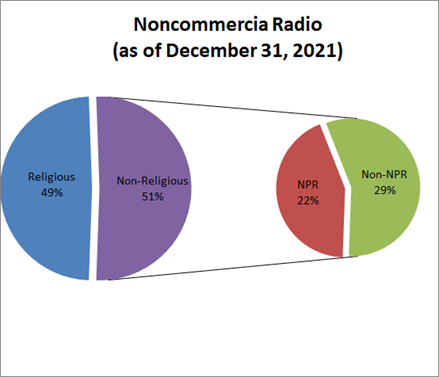