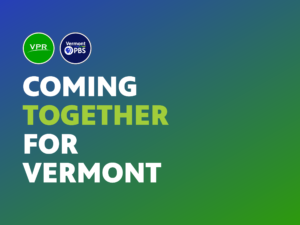 VPR And Vermont PBS Will Merge, To Strengthen Local Media

The boards of Vermont Public Radio and Vermont PBS have voted to join together to create a new public media organization, to better serve the community.

The new organization will be led by Scott Finn, current president and CEO of VPR. Steve Ferreira, acting Vermont PBS CEO, will serve as COO.

“It’s never been more important to strengthen public media and build deeper connections within our community,” said Marguerite Dibble, chair of the Vermont PBS Board. “After many successful collaborations, we’ve recognized that these two organizations share a mission and vision to connect Vermonters. By teaming up, we will be better positioned to serve the community.”

“The media landscape is rapidly changing, and the needs of our audiences are evolving,” said Charlie Browne, VPR’s board chair. “Together, our talents and complementary offerings will provide our audience with the ability to experience education, news, culture, the arts, and local content in a variety of formats, to meet their individual needs.”
READ MORE AT VPR...

WKSU in Kent, Ohio, and ideastream in Cleveland are looking into a possible partnership with help from a $100,000 CPB grant to study “opportunities for growth and expansion,” the stations announced Monday.

The stations have overlapping broadcast coverage areas in Northeast Ohio and have collaborated on journalism and co-hosting Wait Wait…Don’t Tell Me! Following long-term strategic planning at both stations, they began more deliberate talks in February about working together more closely, said Wendy Turner, executive director of WKSU. READ MORE AT CURRENT...

NSPR Expands Collaboration with CapRadio After Board Vote

In spring 2019, NSPR (a service of California State University, Chico) and CapRadio (currently operating stations licensed to Sacramento State) announced they were exploring a long-term management agreement with support from Public Media Company, a nonprofit public media research and consulting group. The focus was on expanding the impact of public radio in Northern California and improving local, regional and state news coverage, as well as growing listenership, financial support and community engagement for NSPR.

“Six months into the study, it became evident that this partnership had great potential to secure a healthy future for NSPR,” NSPR General Manager Phil Wilke said. “We’ll be able to bring a wealth of resources to programming, membership, engineering and other facets of the station that we could not have done on our own—ultimately delivering on our public service mission in a more robust way.” READ MORE...

After hiring diverse talent, pubmedia’s challenge is ‘what happens after that’
“It’s really, really incumbent upon leaders of newsrooms right now to understand that there is a mandate for change, that the world has said something to us and we have an opportunity in front of us right now,” Vinnee Tong, managing editor of news at KQED in San Francisco, said during a webinar Tuesday.

Tong was speaking with Doug Mitchell, founder and project manager of NPR’s Next Generation Radio, in a conversation moderated by Abby Goldstein, executive director of the Public Radio Program Directors Association. READ MORE AT CURRENT...

PBS has announced that viewers are now able to live-stream their local PBS stations for free over internet connected devices. As of now, 85 stations can be live streamed, with more expected to become available in the future.

Streaming will be available on major web browsers (Chrome, Firefox, Safari and Edge) as well as through the PBS Video Channel on Roku devices. Viewers can not live stream PBS channels on Apple TV or Fire TV at this time, but PBS says it is exploring those options.

PBS had previously expanded its access to YouTube TV, but this now gives it a more direct line to viewers and at no additional cost. READ MORE AT NEXT TV...

Local Edition is the Poynter Institute’s newsletter for people who care about local news. Written by Poynter’s Locally project editor Kristen Hare, each issue of Local Edition focuses on what’s working in local news and who’s making it work.  LEARN MORE AT POYNTER...