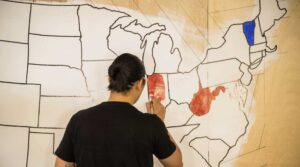 FROM NPR: There have been a lot of questions heading into Election Day 2020 about how much information will and will not be available on election night, as everyone waits to see who has won the presidential contest and other races.

NPR provides live coverage of the results on the radio and online, and relies on The Associated Press for all vote counting and race calls.

That means we explicitly cite the AP when reporting results — there are no "NPR calls." We will display AP results of the presidential election and other contests on our website.

We will not report the results being tallied or projected by news outlets that are not The Associated Press. Yes, that means we could be in a position in which others have called a key state or the overall presidential race, whether on Nov. 3 or later, but NPR is not reporting that because the AP has not yet made a call.

We rely on the AP in large part because it has a track record of precision and caution.
One distinction between what you will read and hear on NPR and what you may hear in other places is that there won't be "projections." READ MORE AT NPR...

After the pandemic lockdowns put a damper on deal-making earlier this year, Kagan reports broadcast mergers and acquisitions picked up the pace during the third quarter. Radio and television deals totaled $534.7 million during the three months ended Sept. 30, in what the firm labels a “substantial rebound” from $90.3 million in the second quarter which was an all-time low attributable to the COVID-19 pandemic.

The vast majority of deals have been on the television side during 2020. Kagan tallies there have only been $371 million worth of radio deals through Sept. 30. If that pace holds through year-end, it will bring the lowest total on record since before the 1996 Telecom Act ushered in a wave of consolidation and reshaped radio ownership. READ MORE AT INSIDE RADIO...

The station will retain its call letters but will present a new look and feel to viewers. Ball State PBS will continue to offer viewers their favorite nationally-syndicated programs.

“First and foremost, we’re still your PBS station,” said Dan Lutz, associate vice president for Information Technology, who serves as the station’s general manager. “We will continue our mission to serve viewers in East Central Indiana with programming and services of the highest quality, using media to educate, inspire, entertain and express a diversity of perspectives.” READ MORE...

OPB Joins ‘Public Media for All’ Initiative To Raise Awareness of the Lack of Diversity, Equity and Inclusion in Public Media

OPB has joined the Public Media for All initiative as a participating organization, becoming part of an effort to raise awareness of the negative impacts of the lack of diversity, equity and inclusion in public media while also sharing solutions among organizations and individuals.

Public Media for All is a diverse coalition of public media workers, led by people of color. They believe that diversity, equity and inclusion at every level and in every facet of public media is essential for ensuring meaningful service to all.

OPB is the first public media station to join this initiative along with other industry organizations, including Greater Public, Public Media Women in Leadership, and AIR. READ MORE AT OPB...

ICT Editor Mark Trahant joined the news service in 2018 after it took a two-year hiatus. His efforts since then to expand ICT’s audience and multimedia production led to the TV broadcast, also titled Indian Country Today. READ MORE AT CURRENT...