Colorado Public Radio (CPR) was Public Media Company’s first client and we have been partners ever since. As CPR’s COO, Jenny Gentry, says, “When I look back on the evolution and growth of CPR over the past 20 years, Public Media Company has been a strong partner through every step. PMC’s services – from broker, through structured financing, to strategic planning – have enabled us to become a strong leader in the public media industry, allowing us to reach millions of listeners across our state with multiple formats, providing news, information and music that our audiences rely on.”

CPR had a remarkable journey to its current place as one of public media’s most respected and impactful organizations.  Here is just a taste of how the station got to where they are today: 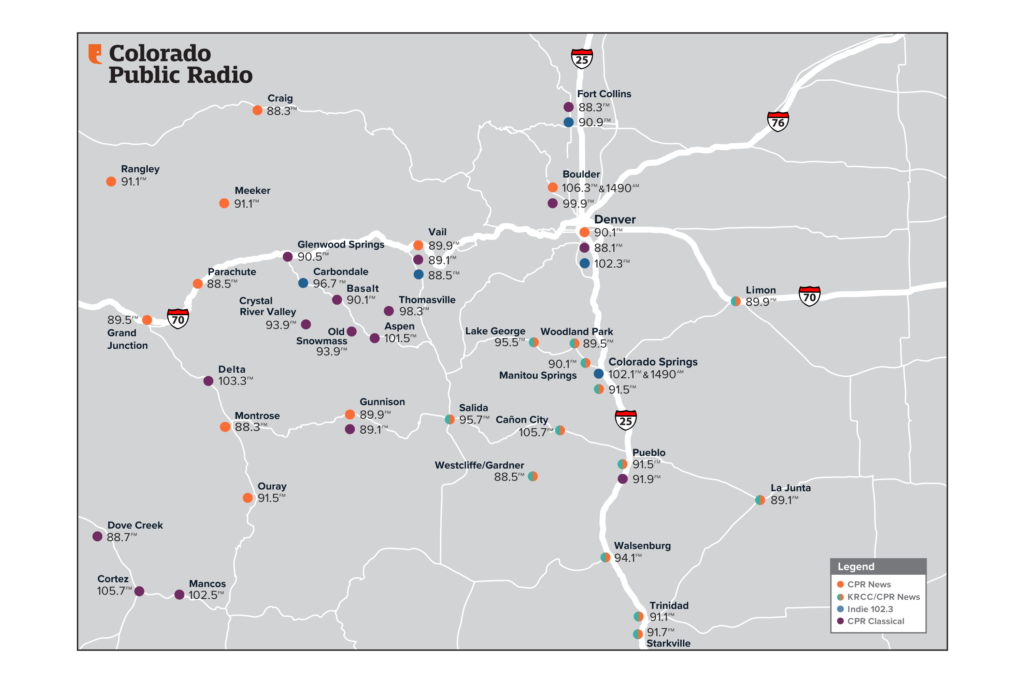 The buildout of CPR’s state-wide network with distinct signals and formats did not happen overnight. CPR’s first station (KCFR) was originally licensed to the University of Denver in 1970 and then became a community-licensed station in 1984. In the same year, KPRN in Grand Junction came on the air to provide services to western Colorado. In 1991, KCFR and KPRN merged to form Colorado Public Radio. Throughout the ’90s more signals were added to expand CPR’s services throughout the state.

A key strategic decision was made in 2001, when based upon 10 years of feedback from audiences statewide, CPR’s board announced a plan to provide full-time News and full-time Classical for its listeners on separate signals. This decision led to a burst of activity including the acquisition of several signals and the use of tax-exempt bond financing. Assisting CPR in some of its acquisitions and the financings was Public Media Company (originally established as Public Radio Capital), a new national non-profit formed to aid public media stations with expansion.

This first transaction and financing completed by Public Media Company established a twenty-year-long relationship with CPR and PMC, including at one point, PMC acquiring a station for CPR under a Limited Liability Company until CPR could refinance some of its existing tax-exempt debt. And CPR’s growth and expansion continue, with the upcoming completion of a state-of-the-art two-story media center that will open in mid-summer 2021 in Colorado Springs, and the recent addition of 96.7 FM in Carbondale, CO to provide listeners access to Indie 102.3.

Colorado Public Radio (CPR) is a statewide network offering three distinct formats for listeners: News, Classical and Indie 102.3 (new music and emerging Colorado artists) across more than 40 stations, including operating KRCC in Colorado Springs which is licensed to Colorado College. In addition, the Denverite, a digital member-supported news organization, is powered by CPR.